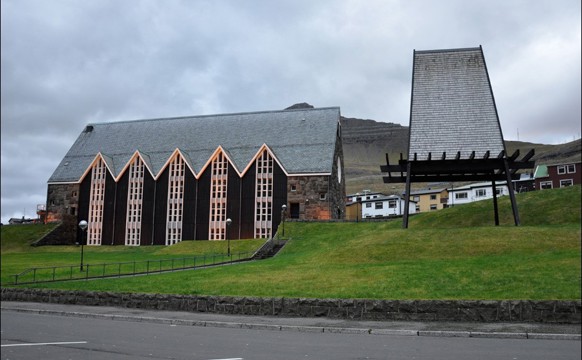 About the Church of the Faroe Islands

The Faroese national evangelical church is traditionally referred to as the Church of the Faroe Islands.

The people of the Faroe Islands accepted Christianity around the year 1000. According to the saga of the Faroe Islands, Sigmundur Brestisson built a church on the island of Skúvoy, and it is possible that chieftains and peasants built their own churches in their villages. It is, however, unlikely that any public church system was implemented until after 1100.

Shortly after 1000, an episcopal residence was established in Kirkjubø subject to the archdiocese of Nidaros in Norway, which was established in 1153. Up to the Reformation, the Faroe Islands remained one of the eleven dioceses in the archdiocese of Nidaros. We know the names of 33 Catholic bishops in the Faroe Islands. The most prominent of these was Erlendur, who was appointed in 1268 and died in 1308. Erlendur started construction of the Kirkjubø cathedral (the St Magnus Cathedral). It is commonly believed today that the building was completed and inaugurated as the country’s cathedral.

Priests initially received their income from vocation. Priests were allocated a rectory and later also an annexe-farm bestowed on a clergyman's widow. Other sources of income included offerings, money received from communicants and tithes. The latter two of these were abolished in 1908. Priests were additionally entitled to free conveyance up until 1936 when this system was abolished.

Churches were managed by the Faroese county authorities. The churches were built by local parishioners, and churchwardens were tasked with looking after the churches. Churches were financed by tithes.

At the turn of the 19th and 20th century, most Faroese citizens were members of the Church of the Faroe Islands. Today, there are 40,891 members – 80 percent of the total Faroese population.